Help, tips and assistance for students. This blog is part of a range specifically for students and can be found, along with others, under Student GCSE Blogs.

I want to look at AQA P1 Q2 (language analysis).  Here’s an extract from The Woman in Black by Susan Hill.

During the night the wind rose. As I had lain reading I had become aware of the stronger gusts that blew every so often against the casements. But when I awoke abruptly in the early hours it had increased greatly in force. The house felt like a ship at sea, battered by the gale that came roaring across the open marsh. Windows were rattling everywhere and there was the sound of moaning down all the chimneys of the house and whistling through every nook and cranny. 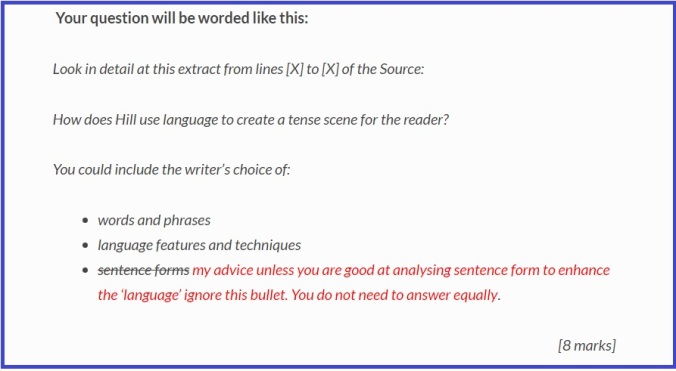 Analysis of a paragraph in detail – which words/techniques to look at, and why?  Let’s look at each of the author’s choices in close up:

During the night the wind rose. The preposition ‘During’ shows the reader the relationship between the nouns ‘night’ and ‘wind’. By making it vague, at some time in the night – it disorientates a reader’s senses adding to the overall effect of suspense Hill was trying to create. The verb ‘rose’ personifies the wind making it appear supernatural as if it suddenly came alive. The use of a simple sentence adds to the atmosphere the author was trying to create through the omission of a long, unnecessary complex sentence.  Finally, having the scene take place at night makes it more frightening because you can’t see clearly and have to rely on all your senses.

As I had lain reading I had become aware of the stronger gusts that blew every so often against the casements. The verb choice ‘had’ works because it means to experience or possess, so by choosing the past tense suggests they no longer do! The adjective ‘strong’ suggests physically demanding, however, by changing it to a comparative with -er could allude to a conflict between external forces and the narrator.  Finally, the verb ‘blew’ again a past tense of blow could mean just a creation of air, to me it hints at the wind pursing its lips – in other words it needs to be close!

But when I awoke abruptly in the early hours it had increased greatly in force. The conjunction ‘but’ introduces a clause contrasting with what has already been mentioned. The verb ‘awoke’ (again past tense of wake) literally means to stop sleeping; a person (real or not) is always slightly disorientated when just woken up! The adverb ‘abruptly’ doesn’t ‘hint’ at anything! It clearly means suddenly and unexpectedly. My next choice is going to be the pronoun ‘it’ – Hill is referring to the wind, but it could also mean something identifiable. She then ends this sentence with three similar vocabulary choices ‘increased’, ‘greatly’ and ‘force’. All three suggest increasing violently in size!

The house felt like a ship at sea, battered by the gale that came roaring across the open marsh. Here I want to look at Hill’s use of a simile – by comparing the house to a ship helps the reader see how forceful the wind and storm were. You begin to imagine the powerful sea smashing at a small insignificant ship/boat, and in turn can see how the bricks and walls of the house are no match for nature. The adjective ‘battered’ suggests being hurt by repeated attacks. Finally, the adjective ‘roaring’ continues the personification of the wind to something enormous or tremendous.

Windows were rattling everywhere and there was the sound of moaning down all the chimneys of the house and whistling through every nook and cranny. Hill finishes the paragraph with the choices ‘rattling’ (adj) ‘moaning’ (v) and ‘whistling’ (v) when describing the wind. She is clearly comparing the wind to a ghost, something the character cannot really see or understand. And the adverb ‘everywhere’ means he cannot escape!

However, you need to put it all together into a single paragraph. Even when you are analysing language you need to be accurate and concise, in other words, select a ‘judicious’ range of quotes. You are specifically looking at words that make this a tense scene (Definition: unable to relax because of nervousness or anxiety). So which words (language) specifically makes this scene ‘tense’. Let’s look at the question again:

Hill uses a series of verbs such as ‘rose’ and ‘blew’ to personify nature, making it seem real, powerful and unrelenting, it also suggests the wind has risen from the dead and is coming for the narrator.  Hill continually compares the wind to the supernatural as a powerful and frightening element, showing the reader how small and alone the narrator is. The author also uses techniques such as a simile to compare the house to a moving ship so the reader can visualise the strength of the wind against the old house being repeatedly ‘battered’ as if it’s moving and swaying. Hill finishes the paragraph with a series of verbs ‘moaning’ and ‘whistling’ again personifying the wind as if it’s chasing the narrator wherever he goes. The verbs also suggest the wind (or ghost) is like, or worse ‘is’, a tortured or vengeful spirit.  Hill’s choices are not only effective in creating a suspenseful and terrifying atmosphere but are successful as they create a sense of foreboding for the character. It feels as if you are in the house, wondering if it is the wind or a ghost! Hills’s choices make this a very tense and anxious scene for the reader who will be terrified not knowing what hides in the darkness.

4 thoughts on “Woman in Black”