Help, tips and assistance for students. This blog is part of a range specifically for students and can be found, along with others, under Student GCSE Blogs.

This wasn’t written by me but by a year 11 student at my school (A.Butler). He gave me permission to add to my blog as a Paper 1, Question 5 practice.

Write a descriptive short story based on the following image: 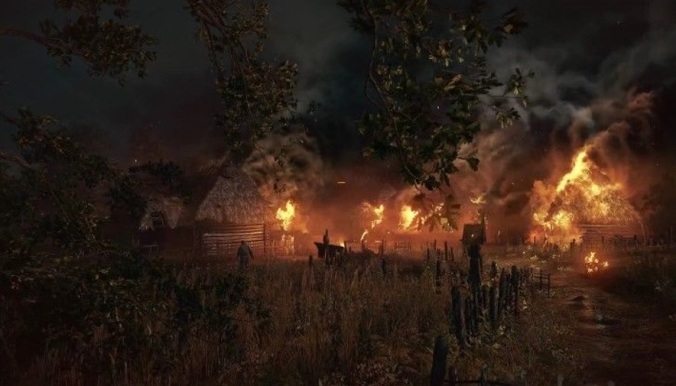 A high pitched scream pierced past the roar of the burning buildings. A sorrowful shriek accompanied it through the crescendo of collapsing hovels. A mournful wail of grief threw itself through the crackling flames. Mean whilst a dense cloud of choking ashes; thick, black smoke; and a heavy pallor of dust surged upward against the background of the evening dusk. The scream was cut short, an evil laugh echoed in the emptiness it left behind. Seeing the houses burning ferociously, emitting a seemingly ghostly glow that worked its way into the surrounding gloom, I noticed there were bodies scattered in the paths between the huts and shacks. Where once children had played, obscene sights of mutilated corpses remained, working away into the back of my mind. I stepped out from the bushes warily, in disbelief at the horror before me.

Steadily a strangely familiar smell: that of roasted pork, wafted into my nose, as the fierce heat of the raging fires embraced my entire body. My stomach rumbled at the anticipation of pork, juxtaposing the reality of what I was seeing. With a sickening realisation, it dawned on me that it wasn’t quite the smell of roasted pig flesh that I was being provoked by, rather it was the smell of my burning neighbours. Their flesh was consumed by the fire, whilst others outside smouldered in the puddles of blood and dirty water that were rapidly evaporating. Acid burned the back of my throat, as it bubbled up from my stomach. I heaved, heaved, and heaved again, but did not fully vomit. My stomach rumbled again, and I cursed my stomach for thinking it was to be fed. A dribble of acid, mucus, and saliva fell from my mouth, mixing with the manure that had recently been spread over the field I was entering. It tasted of despair, of hate, of regret.

I staggered, confused at what I was seeing, through the field of new wheat. The ears of corn were oblivious that their creators had perished, and waved gently as a breeze rippled through them, even now carrying layers of soot and ash. The sharp prickling of the corn made itself aware to me, but I ignored it, as I stumbled towards the outskirts of the village.

Mortified, I turned my head to see a scarecrow’s face. It stared at me. In its eyes, there was no remorse, just an empty black. I stepped further forward, and suddenly tripped over a large black object. As I scrambled away, I realised I had shouted out. I stopped and listened. A grim voice sounded out: “there’s another one!” Silence. “Sounds like he was in the field!” another suddenly cried. Much quieter a sinister, closer voice mumbled to me. “Keep your head down if you want to live, boy.” Startled I turned to where I had tripped, and saw the face of a man I had never seen, a traveller perhaps. I could only see the whites of his eyes, which contrasted with the soot-black of his face. There was something in those eyes, anger, pain, resent perhaps, that made me shiver. I shook my head and crawled away from him, out of the field, and into a narrow gully at its edge, all the while I felt his eyes piercing into my back like spearheads.

The voices came closer. Petrified, I dared to lift my head above the lip of the dyke, to see to men, clad in thick leather, their faces masked, their heads covered in dark hoods, so even their eyes were hidden. One, holding a worn and rugged sword, looked to the other, who could maybe match the same description of his friend’s sword, and spoke words of cruelty, and morbid sadism. “I can’t be bothered to search for whatever straggler hides in this field. Let’s just burn it, besides, no one will be coming here for a long time.” He barked what he must have thought was his interpretation of a laugh. Recalling his words I realised with a horror what that meant…

As the man who had remained silent picked up a nearby fallen branch and plunged it into the flames of a burning thatch roof, I almost called out. With great effort I managed to stop myself, instead only a pitiful keening that I was sure they would hear emerged. They didn’t. Holding his makeshift torch, the second man called out “you can burn alive or feel my axe in your neck, heathen!” Heathen. Heathen. Who called innocent villagers heathens? These men were not broken men, marauders, they, they were members of The Order…

Without waiting for a reply he threw his torch in a high arc towards the middle of the field. It spiralled gracefully, like a dancer, through the night sky (for now the sun had fled the atrocity), before descending like some fell beast into the young corn. The flames quickly caught the dry ears, swiftly multiplying and intensifying. The murderers, for that is what they were, stamped their feet rhythmically. I thought I heard some kind of chant or prayer, put the burning crops were too loud. With a roar of pain the traveller rose from the field and sprinted for the killers, his cloak burning brightly. “YOU BASTARDS!!!” he screamed, “YOU FILTHY BAS”- his voice was cut short as a crossbow bolt pierced his windpipe. A pitiful, gurgling, gasping sound emerged from him as he fell into the flames. A vapour of blood rose into the sky, the heat evaporating his life before him.

Hurriedly, the men of The Order ran to their horses, as the mounted crossbowman, clearly some kind of Purifier, called after them “glee not in the death of that infidel, for we will cleanse this world of many more tonight!”

Echoing into the distance the sound of many hooves and shouts of pride departed. I waited in the silence, sobbing into my cloak, until dawn, to be sure they had left.

Bewildered, I shuffled down the central lane of the village, or rather, its smouldering ruins. Smaller yet still threatening fires continued to consume anything that was flammable, and flames still insisted on catching my cloak as I walked past the village hall. Much of its lower part was made of stone, yet under the heat many had cracked. The Order has smashed most of it down, and set afire to what could be burned. Bodies were strewn haphazardly around the old market square, some with their throats opened to the elements, some with bolts protruding, most with stab wounds of various descriptions. Some blood continued to trickle down the lane towards the only wholly stone building, our shrine to the spirits of the surrounding hinterland. The Order had been most brutal there. Corpses hung from the Sharwood trees that formed a grove around the shrine. I remembered being told by a fervent believer that Sharwood burnt at a temperature higher than that at which iron would melt, and that it could only be cut down after a week’s chopping. That man now dangled from a tree, his eyes gouged out by the wicked blades of the Purifiers. A few piles of smouldered corpses lay scattered around the building, work more of the Purifiers. I shuddered at the thought. Amongst them lay women and children, impaled by stakes. I could not bear to describe nor look at any more of the scenes.

The Order, or in full The Sacred Order of the Blackstone Sanctity, were merciless killers and cultists I knew, but this was far worse than I had originally believed. I turned at the sound of another man’s movement. Startled, I saw my sister’s husband emerge from under a pile of corpses that blocked a doorway. He looked at me, and his shoulders sunk with relief. “I thought you were one of them” he muttered. “They have already left” I responded in a likewise volume and tone. “Rumours say that they always leave men behind to kill survivors and people who are returning from other places” he said, ignoring me. “They burned your sister alive, on the other side of the village, I saw her as I tried to fight off some of the Order’s men, and they knocked me over and thought me dead.” He spoke with no emotion, his eyes blank. He had seen too much I knew. I nodded, not knowing what to say or do. He stared at me, then past me. “By the sprits the rumours are true!” I turned my head even as I instinctively started running to drag him to safety…

Three men, red cloaks on their backs rode towards us, one with an axe, one a lance, one a bow. No sooner did I see the bowman draw his bow did I feel the arrow graze past my ear, and thud into my brother-in-law. I jumped over his body. I had to survive. I had to ignore what I had lost and could not save in this moment so that I might avenge them. I ran. What a fool I was. No man can outrun a horse, nor escape the lance fate has aimed for him.

The thundering hooves came closer. I feebly ducked my head. An arrow struck me in the back. I collapsed as my legs ceased to function. I felt no pain below my chest. I realised it had struck my spine, and felt the head scraping against it. A scream of agony burst from my lips. I sputtered some blood out of my mouth. I heard a man dismount behind me, and another one further back. A whimper, my brother, was cut short, and steps were taken toward me. I tried to move, but was too weak. Rough hands clasped my hair, and pulled my head up. I faced toward the steadily brightening sky. “Old ways won’t open new doors, infidel. It is so sad you could not convert to the truth. Know that eternal fire awaits you. You were quite quick I must say, for a heathen. I suppose the fire inside you burned brighter than the fire around you. Such a sad, sad waste.” I tried to spit blood and contempt onto his hands, which held my chin up to the sky. It came out as more of a trickle. I closed my eyes. I felt the warmth of the sun on my face. I felt the cold of the blade on my neck. A sharp cut. A burst of pain, my eyes rolled back. Darkness. Silence. Peace.

Thank you for reading.